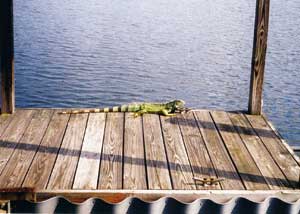 Calvin Dellinger was surprised with what he found on his Lake Norman pier this week.
Photo by Scott Hinkle

The Himalayas has its Yeti and the Pacific Northwest has its Bigfoot, but Lake Norman has its… iguana? For a few hours on Thursday, Sept. 4, Calvin and Allie Mae Dellinger of Beaten Path Road on the Brawley peninsula got a close look at the strange visitor who had made himself at home on their pier.

The reptile appeared to be just short of three feet long. With very long claws and skin that appeared rough and ragged in a few places, the animal had the markings of a family pet who was accustomed to far easier conditions in an aquarium, as opposed to in the Lake Norman wilds.

While Iredell County animal control in Statesville politely told the Dellingers that its staff was more interested in stray dogs and cats than big-clawed reptiles, the couple decided to ask around the neighborhood to see if indeed a family pet had gone missing. But when a couple of excited neighborhood boys came down to catch a glimpse, the iguana decided he had had enough excitement.

“He jumped off the pier and swam across the cove,” said Mrs. Dellinger. “We called our neighbor over there, but the thing was out of the lake, up on the shoreline and gone.”

The Dellingers would like to know what type of reptile was on their pier, as well as if someone nearby has lost a family pet. If you recognize the animal in the photo, send an e-mail to hinkle@thelakepaper.com. Also, keep a camera handy to snap a shot of the Lake Norman monster.

This article is reprinted with permission of the Lake Norman Times. 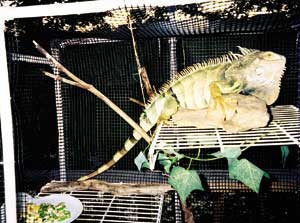 Potential rescuers beware: Buddy (above) has very long and sharp claws. Owner Sharon Wagner advises to toss a towel or blanket across Buddy before attempting to pick him up.
Photo by Ben Wagner

The photo in last week’s Lake Norman Times showed an iguana slightly haggard and much thinner than this, but 13-year-old Ben Wagner knew immediately that it depicted Buddy, his 4-year-old companion and family pet. The pet escaped his cage on the family’s back deck on July 11 and has since enjoyed a summer on the lam, Lake Norman style.

An agile green iguana, unafraid of the woods and the water, Buddy showed up last Thursday on Calvin and Allie Mae Dellinger’s Beaten Path pier. Beaten Path, off Bloom and Brawley School roads, is a very short cove away from the Wagner family home on Grasshopper Circle off McKendree Road.

“He was well-fed and loved to hang out in the garden on a leash when not in his cage,” said Sharon Wagner, Ben’s mom. “We really expected that he would show up back in the garden.”

The Wagner family would love to have Buddy back home, especially before cooler weather sets in since it is unlikely the reptile could survive the outdoors through winter.

If you spot Buddy, call the Lake Norman Times at (704) 664-2882 or e-mail us at lakenews@thelakepaper.com. The paper will notify the Wagner family.

This article is reprinted with permission of the Lake Norman Times.